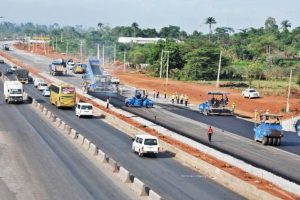 Two construction companies handling rehabilitation and expansion works on the Lagos-Ibadan Expressway, Reynolds Construction Company and Julius Berger, have threatened to abandon work on the road.

According to details of memorandum and annexes presented by the Minister of Power, Works and Housing, Babatunde Fashola, at the hearing organised by the House of Representatives’ Investigative Committee on Breach of Privilege, Violation of Appropriation Act and Incitement of the Nigerian Public on Friday, the companies threatened to abandon the project due to poor funding.

Mr. Fashola had been invited by the committee to, among other concerns, clarify statements credited to him alleging that the lawmakers had worrisome knowledge of the budget process.

Earlier in June, the minister had accused the National Assembly of slashing N21 billion off the N31 billion vote for the Lagos–Ibadan Expressway.

“We were asked to complete those abandoned projects; the budget of Lagos-Ibadan Expressway was reduced by the National Assembly from N31 billion to N10 billion. We are owing the contractors about N15 billion and they have written to us that they are going to shut down,” Mr. Fashola had said.

But details contained in some of the documents presented by the minister, Friday, showed that the two construction companies handling the rehabilitation of the road had indeed threatened to suspend works on the road.

According to a letter signed by the division manager of Julius Berger, W Loesser, which was received by the Ministry of Power, Works and Housing on June 5, the company expressed concerns over the state of funding of the road project.

“Honourable Minister, it has become evident that the required adequate funding for the continuation of the project is not available,” the letter read in part:

“We trust you will understand that therefore and as a consequence of the unacceptable financial risk to Julius Berger Nig. PLC we are left with no choice than to immediately commence suspension of the works on the project, as earlier notified.”

Similarly, Reynolds construction said it was worried about the worsening financial situation of the road project.

“At the moment, the outstanding debts for approved certificates for certified works stands at N7, 829, 277, 294,” the company said in a letter dated June 2.

“It is noted that the 28-day window allowed for payment of the certificates by Clause 60.4 of the conditions of Contracts (“CC”) had long expired. In addition, there is another certificate (No. 19) of N1,108,334,258 under processing.

Both Julius Berger and Reynolds are handling the first and second sections of the road, respectively.

With the budget already signed into law, a supplementary budget or virement of funds which has legislative approval would be required to adequately fund ‎the road project.