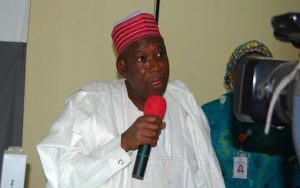 The new Interim Management Officers for the 44 Local Governments in Kano state has been warned by the state governor, Abdullahi Ganduje against corruption and laxity to duty.

At the swearing-in ceremony on Monday night, Ganduje said that his administration would continue to give priority to service to the people.

‎The swearing in followed the confirmation of the officers by the State House of Assembly.‎

Ganduje urged the new appointees to perform their duties with diligence, honesty and fear of God, adding that they should as initiate developmental programmes in their areas.‎‎

He also urged them to be transparent and prudent in their dealings in order to achieve the noble objective of the APC government in the state and the country as a whole.

‎”Your appointment today as Sole Administrators should, therefore, be seen as a call to service of our people. You are more close to the grassroots and a lot of expectations falls on you. You can be rest assured of our continued support,” he said.‎
‎‎
According to Ganduje, the officers and their six Councillors would hold office for not more than six months before handing over to democratically elected chairmen.‎

The 44 Local Government chairmen elected during the tenure of Sen. Rabiu Kwankwaso completed their tenure on May 28, 2017.‎