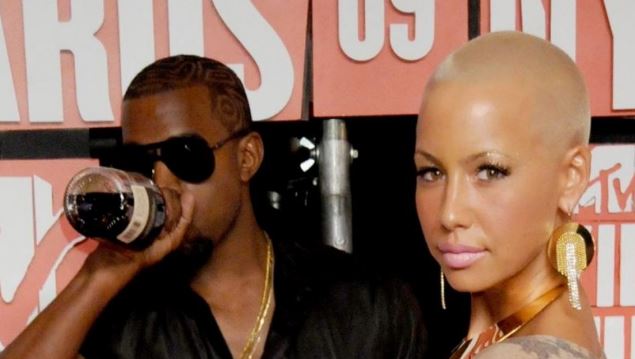 Reality TV star and model, Amber Rose who has been silent about her relationship and eventual breakup with music star Kanye West has finally opened up in a recent interview with Complex.

She said the rapper bullied her.

Amber Rose and Kanye West officially began dating in 2008. After two years, the pair broke up and Rose ended up with rapper Wiz Khalifa, with whom she has a son, Sebastian. She later broke up with the rapper and is currently with 21 Savage, her new boyfriend.

One of the hosts of the Complex show, “Everyday Struggle,” Joe Budden, quizzed Rose about Kanye West’s mental health condition, which has been the topic of many headlines since he was hospitalised in 2016. At first, Amber Rose was reluctant, but the host’s persistence paid off.

“Imagine living with him,” Rose said at last. “That’s all I’m gonna say.”

Budden and one of his co-hosts, Akademiks, continued to press her about her and West’s Twitter fight in January of 2016. After West mentioned her son while dissing Wiz Khalifa, Rose fired back with some personal details about their former sex life.

“I still have never said anything mean about Kanye,” she maintains. “This is after six, seven years of constant bullying from him. He said one thing about my child…”

The buzz cut-spotting celeb made sure to note that her relationship with West didn’t leave a lasting damage.

She said: “I could have had a reality show just off the fact that I was his girlfriend,” she explained, “I said ‘You know what? I’m a real-*ss b*tch. I’m gonna take the high road. I’m gonna work my *ss off and I’m gonna get everything that I’m gonna get on my own.”