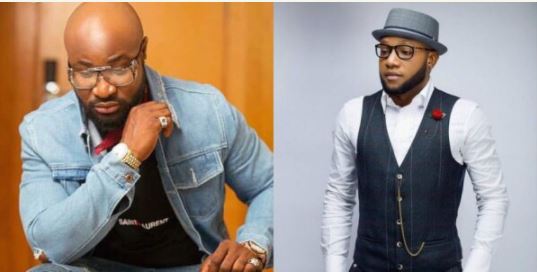 Kcee, the limpopo crooner has been whipped verbally by Desmond Ike who is currently managing Harrysong over his action of suing the Alterplate artiste to court.

Mr. Ike has reiterated that the Five Star Music record label artiste is struggling for media attention as he battles with a dead career. He explained on a lengthy note that Kcee has remained bitter over the decision of Harrysong to dump him to move on with his musical journey.

“The so called peace between Harrysong and Kcee was just like a smokescreen. From what you can attest to, Kcee has not gotten over dumping him in the thrash. He hasn’t. All he does everyday is to talk down on Harrysong, trying to bring his person down all the time.

In as much as Harrysong has been that very loyal person who doesn’t want trouble, he doesn’t want it to seem like he is biting the finger that fed him. Kcee keeps coming at him. So the tone of that write-up on IG is nothing short of it that he would hear from us this time around. They have bitten more than they can chew. They have gone beyond the norm. This is not done anywhere.

He granted LIB an interview which is on record where he said Harrysong is now free to do his thing. For crying out loud, what is this nonsense he is trying to do? If you ask me, there is only one explanation to it.

Kcee wants to stay relevant because his career is dead and he knows it and the truth is that for as long as he continues to oppress people who put their life on the line to make sure he redeemed his dying career when he was drowning in the deep blue sea, he would continue to drown and drown lower.
That is the fact, because you cannot bite the fingers that fed you and feel that you will go Scot free. He keeps telling the world what Harrysong did. Has he told the world what he did to Harrysong? How can somebody be that heartless?

When it was Harrysong, everybody was shouting Harrysong, Harrysong. In as much as we didn’t want to talk, they pushed us to make an official statement which we did and they took offence based on our statement.

Meanwhile, they were the first to release malicious statement against us. Now, it is no more only Harrysong. It is now Soso. Everybody needs to ask him what Has Harrysong done to you?

We have challenged him and we are still challenging him. Let him go and make a hit instead of running around looking for relevance where there is relevance. Let him and make music. Let him trend doing music and not on controversy.

It is because he is jobless that is why he is looking for ways to make himself relevant. Because we know that he is jobless, we are going to give him enough work. He should go ahead, we will meet him”.

On the charges filed against Harrysong, Desmond said;

“It is about Harrysong and Soso working together against him. That is his claim. That it is a breach of his Fundamental human right. That they are trying to do some publication against him, to malign his image.

It is a cheap lawsuit. It is lame. There is no depth to it. Those claims are fictitious claims. There is no depth to it. So as far as the Alterplate family is concerned, Kcee has been dumped where he belongs. and we are not going to go there to him except he comes to apologize and he must make this apologies in the public For as long as he has decided to toe the line and path of war, war shall he get”.

On when the court papers were served, he said “It was served last week Friday. We are working on responding to him”.

Asked whether the Alterplate team have reached out to him, Desmond said:

“No. He should F**k off. We are not getting across to him. Our lawyers will get across to him. He is an idiot. We are not going to glorify a jobless bunk career. Did he call us before he dropped the lawsuit? We are ready for him. If he drummed the drum of war, then let us go to war”.

Asked whether chairman of the Five Star music and Kcee’s younger brother, Emoney, might be aware of the suit, Desmond said;

We don’t care anybody who is aware and who is not aware. Nobody is bigger than the law of the land. The fact that he has gone to court which is the hope of the common man, then let us go to court. We are not afraid to go to court. We will meet them in court”.