Home News Feed Lady Bleeds To Death On Her Period, Read How | Photo
Facebook
Twitter
WhatsApp
A woman who was on her period has perished in a really sad manner after she was banished to spend time inside a shed. 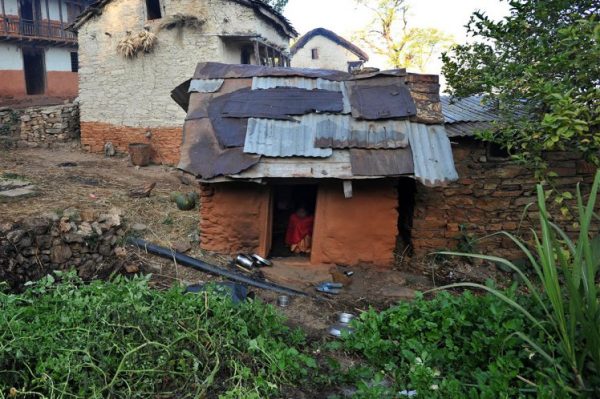 Tulasi Shahi, an 18-year-old lady has died. The young woman die when she was banished to a hut during her period.
According to Metro UK, Tulasi Shahi  was ordered to spend the days she was menstruating in a shed-style structure, an outdated Hindu tradition which was outlawed in Nepal more than a decade ago.
Ms Shahi, from Nepal’s western Dailekh district, is reported to have died after being bitten by a poisonous snake while staying in a shed where she was required to sleep during her period, WaterAid said in a statement.
The practice of ‘chhaupadi’ banishes menstruating girls and women to animal sheds for the duration of their period as they are thought to be ‘impure’ or dirty.
Ms Shahi’s cousin Kamala Shahi said: ‘If she was given proper treatment she would have survived. she died because of superstition.’
‘Sadly, this is not an isolated case as every day, girls and women in parts of Nepal are forced to live outside their communities just because they are menstruating,’ Tim Wainwright, Chief Executive at WaterAid UK said in the statement.
‘The ancient practice of chhaupadi is perhaps the most acute example of how the stigmatisation of periods impinges on women’s everyday lives.’
Chhaupadi was outlawed in 2005 by the Supreme Court of Nepal, but reports of women and girls dying in attacks by wild animals and from snake bites, or being r*ped while they are in seclusion show the archaic practice is sadly still present in Nepal’s remote west.
Similar confinement also occurs when women give birth.
As well as physical exclusion, girls are forbidden during their period from taking part in ordinary communal activities. They are often without basic necessities, such as sanitary pads.
In December, a 15-year-old girl in western Nepal suffocated to death after being forced to stay in a poorly ventilated shed.
WaterAid also said it had reports that a 14-year-old had died in recent weeks from an illness contracted while staying in a chhaupadi shed.
Although there have been no reported prosecutions, the Nepalese government ‘has committed to break the silence that shrouds menstruation and eradicate chhaupadi… (and) develop a national menstrual hygiene policy framework,’ WaterAid said.