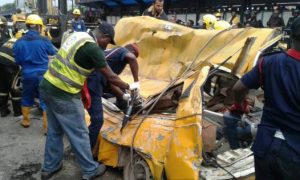 Tragedy struck when the truck conveying 40ft container Laden with plywood fell on the Volkswagen bus.

Sources said the passengers in the bus were trapped, leading to the death of five people.

Meanwhile, the prompt response of emergency agencies led to the rescue of three victims.