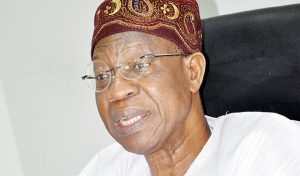 The Minister of Information and Culture, Lai Mohammed, has reacted to criticisms trailing his recent pronouncement on steps being taken by the government to discourage the production of Nigerian movies and music outside the country.

He said, “The NBC code today as it stands has been exploited and not defined and that’s why movies being directed by Nigerians with Nigerian actors, actresses can be shot in South Africa and then brought back to be consumed in Nigeria.

“All we are saying is that we are going to amend the code in a manner that it will not be possible for you to exploit any loophole there to go and shoot outside Nigeria film, music or programs that are meant to be consumed in Nigeria,” Mr. Mohammed said.

Mr. Mohammed on Saturday said the government had taken steps to get the Nigeria Broadcasting Code, NBC to put an end to the trend of producing Nigerian music, movie and programs abroad.

This however drew criticism from Nigerians who asked the minister to address the issue of government officials going for medical treatment abroad first before sanitising the movie industry.

However, the minister said the government had no ill-feeling in its move to dissuade Nigerian films from being produced abroad.

“It is not directed at any particular incident, every country should respect the local industry of other countries. For example, in Ghana they introduced a law today that demands visiting actors to pay a thousand dollars to the government coffers while visiting directors and producers pay 5,000 dollars. We must create an enabling environment and also generate revenue from our creative industry.

Meanwhile, some Nigerian artistes have reacted to the development.

Jude Okoye, Manager and elder brother to multiple award winning duo, P-square took to Instagram to lambast the federal government, describing the plan as an exercise in hypocrisy.

“An industry they never encouraged, supported or empowered is what they now want to control. Let all of you stop running to abroad when you are sick.

“You people are the ones refusing to fix our health facilities so you travel out when mosquito bite ‘una.’ So why tell us where to record when you can’t provide uninterrupted power here in Nigeria. Sometime I wonder how we got it all wrong.”

In his reaction, Peter Okoye, one of the P-square duo said the government should be grateful to entertainers “for putting Nigeria in a good light despite the shame they bring upon the country.”

“The government has been failing us since 1960,” sometimes am ashamed to be called a Nigerian. Another nationality loading,” he tweeted.