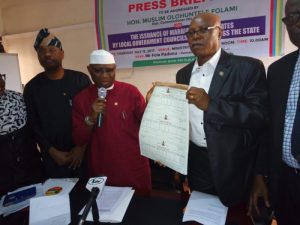 In compliance with the Lagos High Court judgment, Local Governments in Lagos State have begun the issuance of Form ‘E’ Marriage Certificates.

The Lagos High Court had recently ruled that the issuance of modified unified marriage certificates by Local Governments and Local Council Development Areas, LCDAs Marriage Registries was illegal and not in line with Form ‘E’ as stipulated in section 24 of the Marriage Act.

At a news conference on Thursday at the Lagos State Government Secretariat, Alausa, in Ikeja, Lagos, Southwest Nigeria, Commissioner for Local Government and Community Affairs, Muslim Folami, said the Lagos High Court verdict did not in any way undermine the constitutional rights and responsibilities of the local governments to conduct, regulate and register marriages.

“Moreover, Item 1 (i), Fourth Schedule of the 1999 Constitution as amended states that the Local Government is responsible for registration of births, death and marriages,” he said.

According to Folami, after consultation with the Ministry of Justice, the state government had complied with the said judgment by printing the Form ‘E’ stated in the Marriage Act which has already been circulated to the 57 LGs/LCDAs Marriage Registries across the state.

“Hence, marriages conducted in all LGs and LCDAs Marriage Registries are authentic and accepted worldwide.”