Lekki Residents, Others Given Quit Notice By Federal Government Over Flooding

Deolu
As the Nigerian Meteorological Agency and Nigeria Hydrological Services Agency have predicted intense flooding across the country this year, the FG has directed residents of flood prone areas to quickly evacuate. 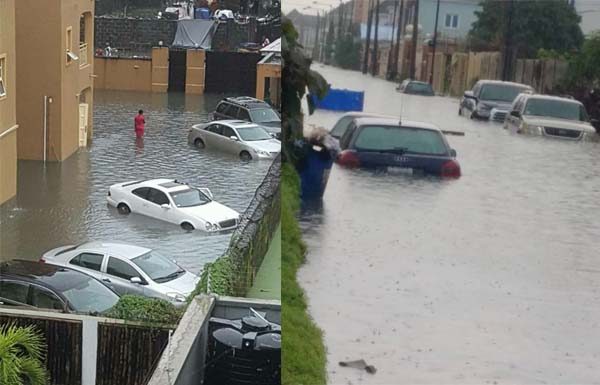 The Buhari-led Federal Government have on Tuesday directed residents of flood prone areas to quickly evacuate to safer places to avoid impending danger as environmental experts had predicted intense flooding across the country this year.
The Nigerian Meteorological Agency (NIMET) and Nigeria Hydrological Services Agency (NIHSA), in their rainfall prediction and flood outlook for 2017, had listed local council areas in almost all the states of the federation as likely to be affected by flooding.
Director General of National Orientation Agency (NOA), Dr. Garba Abari, who gave the advice, said residents of the states and councils listed should take it seriously by taking measures to move out of the areas in the first instance to safeguard assets and property in and around the area.
Abari also urged Nigerians to adopt simple environmental safeguards, including opening of waterways and stopping the dumping of refuse in gutters, among others. He further warned Nigerians to stop building houses along designated water channels to avoid blockage that could cause flooding.
The DG tasked State and Local Governments to brace up to their responsibility of clearing drainages and possibly invoke environmental laws towards flood mitigation in the country.
The Minister of Water Resources, Suleiman Adamu, had said that summary of the Nigeria Hydrological Services Agency, showed that approximately 30 states and over 100 local government areas were categorised as high flood risk areas and therefore should expect flooding.
He said, “In the coastal areas, including Lagos, Port Harcourt and Calabar, possible coastal flooding in these places were mentioned in the NlHSA’s flood outlook.‎”