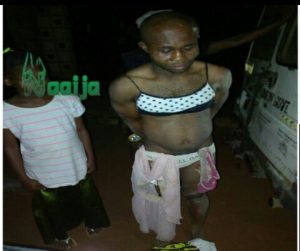 Operatives of Soldiers at  Oduloju street, Sabo-Oniba  have arrested a man identified as brother Hyacinth  for wearing the pant and bra belonging to his 7-year-old neighbor, Ijeoma, for alleged ritual. He was nabbed at around 3a.m on Saturday, while fulfilling a ritual requirement.

The Victim who lives in a room with his wife and children, allegedly owns over five shops with business name ‘A.Y’ in ASPAMDA trade fair complex and 7 plots of land at Igbede.

According to his neighbors, he is very kind and generous. He has, reportedly, assisted his landlord since he packed in and has offered driving his children to school. He is a Deeper Lifer and is popularly know as ‘brother.’

An eyewitness revealed that the soldiers who caught him while performing the ritual on a bridge in the area, had heard a recurring chant of incantations with the name “Ijeoma” and quietly moved closer to the direction of the voice.

However, the suspect noticed their presence and ran away, but the soldiers pursued and tracked him to his house where the wife pleaded for mercy but the case was subsequently handed over to the Oduloju community. He was later transferred to the Sabo-Ajangbadi police station where he is currently being detained.