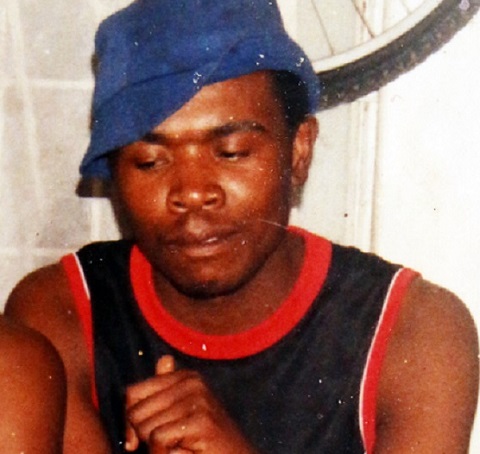 A man identified as Thabani Mpofu, is currently on the run, after he allegedly sjamboked his wife to death when he discovered text messages in her phone and suspected she was having an affair.

According to a report by The Chronicle, the suspect from Bulawayo’s Cowdray Park suburb of Zimbabwe, had a fight with his late wife Thembelani Ndlovu on Wednesday night after he questioned her about a text message that he suspected was from her lover.

He allegedly left his wife’s body covered with a blanket, as if she was sleeping.

While speaking to a correspondent, a family spokesperson, Ms Sithembinkosi Ncube said Mpofu went berserk after reading the message that came into his wife’s phone as he was using it.

“Yindaba ungaphenduli iphone? (Why are you not answering your phone?)” read the message.

“Mpofu demanded an explanation and accused his wife of having an affair. She denied the allegations,” said Ms Ncube.

“He went to his sister with the phone and texted the person who had sent the message pretending to be Ms Ndlovu and arranged to meet the person at his house.”

She said the man who sent the text showed up around 9PM. He saw Mpofu and fled.

“Mpofu pursued him but failed to catch him. He returned carrying the man’s shoe. Mpofu was livid. He mercilessly whipped his wife. I woke up and tried to call the neighbours,” said Ms Ncube

The neighbours, Ms Ncube said, were afraid to intervene as Mpofu continued to beat his wife.

“I rushed to my uncle who lives in the same suburb but we could not locate Mpofu and MaNdlovu. Mpofu, we later found out, had dragged his wife into a nearby bush where he continued beating her. I went to sleep over at our uncle’s house,” narrated Ms Ncube.

She said she returned with her uncle to the house yesterday morning, and found Ms Ndlovu lying dead on a mat on the floor, adding that they tried to wake her up and realised she was dead.

“There was a dish filled with water, a bucket and a fire was lit by her bedside, showing that Mpofu may have tried to render first aid or perform a ritual before he fled from the scene,” she added.

“Her body was badly bruised and swollen. She is light in complexion. She had black, green and purple welts where he had lashed her with the sjambok. She must have endured a lot of pain.”

Ms Ncube said the family hoped police would arrest Mpofu soon as she feared he could come after her.

“I can confirm that a female was found dead in Cowdray Park suburb, after a fight with her husband and investigations are underway,” said Insp Simango.

She advised members of the public to desist from resorting to violence to solve arguments.

“People should seek mediation from trusted third parties like family or church elders. They can also approach the police victim friendly unit for help to reach an amicable solution rather than resorting to violence,” she said.