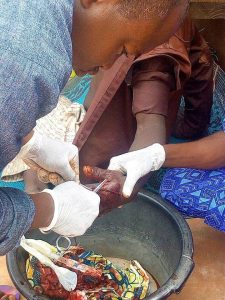 Suspected Fulani men chopped up the fingers of a man identified as Hassan,  during an arguement with some men on  Friday, in Matane, Niger State, Rariya reports.

According to an eyewitness, Nura Alhassan, the problem started when the Fulanis came into the town to buy cigarettes and drinks. Hassan was said to told them he doesn’t like the smell of cigarettes, and an argument ensued.

It later degenerated into a fight and a weapon was used to chop off his fingers. The incident almost led to an unrest in the community, but for the timely intervention of security operatives.