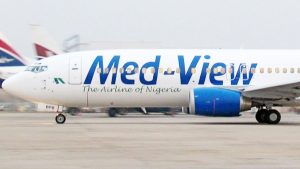 Passengers of Medview Airline who were stranded at the Gatwick Airport, London, were on Tuesday airlifted by the airline to Lagos airport three days after they were delayed.

The airline’s flight schedules had been disrupted for the past few days due to what the company called “operational reasons”.

The News Agency of Nigeria reports that the London passengers were brought back with a new aircraft leased by the airline in Europe to address the situation.

The aircraft, which left Gatwick Airport, London at 2.25 a.m., arrived at the Murtala Muhammed International Airport, Lagos by 8.30 a.m.

A passenger, Ben Okezie, said that his flight was delayed for two days, saying it was very frustrating.

“When we were told to come back on Monday night, I thought it will be another disappointment, especially as the flight was again delayed for several hours.

“However, we finally took off this morning and I am glad to be back home and to my family,’’ he said.

Another passenger, Uche Umeadi, advised Nigerian airlines to improve their operations, especially on the Lagos-London route.

He said the route was very important to the country, adding that it was unfortunate that Medview Airline was the only indigenous carrier plying the route.

“When we have more of our airlines on this route, the air fares will be reduced which will be in the interest of Nigerians,’’ he said.

The airline had in a statement issued by its media consultant, Obuke Oyibhota, on Sunday, apologised to the passengers over the situation.

“We are deeply sorry for all the inconveniences suffered by the affected passengers and everything possible within Standards and Recommended Practices (SARPs) in aviation is being done to airlift them,’’ he said.

It, however, remained unclear what the fate of other passengers stranded in Lagos was as at press time.