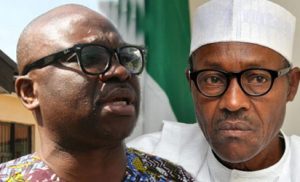 The Ekiti State governor, Ayodele Fayose  has declared that Nigerians caused the pains and suffering they are going on themselves by voting into power  President Muhammadu Buhari.

Fayose who said this on Friday in Benin, while delivering the Convocation Lecture of Benson Idahosa University (BIU), also admitted that he his a controversial person because he did things other people dreaded to do “because they lacked courage and are fearful.”

He said Buhari had reached a stage of diminishing return when he was voted into power.

He said the time for young Nigerians to pilot the affairs of the nation was now, adding that under his watch, nobody above the age of 50 would become a Council Chairman, while the maximum age for a councillor would be 35.

“You can only give your best at your best. Our President is at diminishing return as at today. I should be quoted. We cannot all sleep and face one direction. Idahosa did not do these things when he was close to his grave; he did them at his prime when he had the energy to make a difference.

“How do you give laptop or ipad to a seventy-something-year-old man? How can we continue to struggle with our sons for positions meant for them?,” Fayose queried.

The governor also demanded for a review of the revenue allocation formula, pointing out that a situation whereby the federal government pocketed 52 percent of the allocation was awkward because the challenges facing the country resided in the States.

Fayose, however, praised the national leader of the All Progressives Congress (APC), Bola Tinubu, saying “he is our leader in Yorubaland, forget politics and it does not matter he is in the APC.”

‎He revealed that the late tele-evangelist, Archbishop Benson Idahosa, got his father converted to a born-again Christian at a crusade in Ibadan, Oyo State, in 1980 and that his father later sowed the family’s only car to propagate evangelism.

‎He charged the management of BIU to sustain the vision of the late Archbishop Idahosa, saying that the late man of God could see far beyond his peers when he was alive.

Fayose cautioned​ handlers of the education sector to live their words and put those concerned on the driver seat.

‎He said: “I withdrew my sons from Olashore International School in Osun State and put them in SUBEB Schools in Ado-Ekiti. My sons attended institutions in Nigeria. Many people in the country say something and do other things.”

On how he would actualise his dream of leading the country, Fayose said he would only align himself with God’s power, saying “with God, nothing is impossible.”