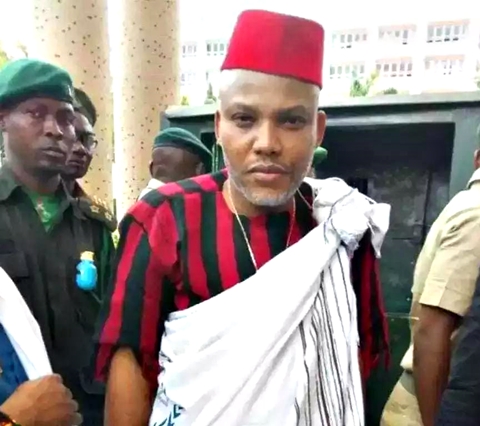 Leader of the Indigenous People of Biafra, IPOB, Nnamdi Kanu has revealed the states to secede with Biafra should Federal Government grant his call for referendum.
He made this known during a Channels television interview. The IPOB leader disclosed that:
1) Rivers state
2) Bayelsa state
3) Delta state
4) Anambra state
5) Imo state
6) Enugu state
7) Ebonyi state
8 ) Cross Rivers state
9) Akwa Ibom state
will make up the states to form a united Biafra should Federal Government grant the call for referendum.
On using war to achieve his aim, Kanu said, “No because truth is a far more potent and deadlier weapon than bullets. No war. When I say Biafra or death, I mean I will keep pushing, either I am Alive or I die in the process. I wouldn’t stop.
“Had sovereign National conference been convened by the powers that be, where every ethnic Nationality comes together to say what type of country do we want? Sit down, discuss and agree. I can begin to perhaps submit to the opposition.
“It is way too late. They have killed so many people. They have ruined too many lives. They have wasted too many souls. How do we bring those people back.”
Revealing the states Kanu said: “Rivers state, Bayelsa, Delta, Anambra, Imo, Enugu, Ebonyi, Cross Rivers and Akwa Ibom. Basically South East and South South without Edo state. This also includes Igede Idoma”
Reacting to comment by the Rivers Sate Governor, Nyesom Wike that Rivers was not part of Biafra, the IPOB leader said, “He cannot say that. It is for the people to decide”.
Similarly, Kanu had declared that he is ready to lay down his life for the actualization of Biafra.