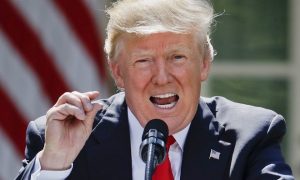 President of the United States,  Donald Trump sent stern warnings on Thursday ao North Korea’s military, he also called on the global community to ensure there are “consequences” for Pyongyang’s belligerence and warning that he is considering a “severe” response.

“I call on all nations to confront this global threat and publicly demonstrate to North Korea that there are consequences for their very, very bad behaviour,” Trump said during a visit to Warsaw.

“I have pretty severe things that we’re thinking about,” Trump said, but added: “That doesn’t mean that we’ll do them.”