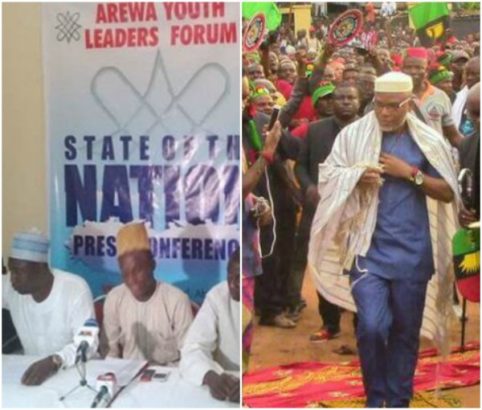 Following their 3-months ultimatum issued to Igbos living in the North, Arewa youth group has written to United Nations demanding that Indigenous People of Nigeria, IPOB, and its leader, Nnamdi Kanu, be declared terrorists.

According to the statement released by the group on Thursday, IPOB’s continous march and growth shows that it is committed to breaking away from Nigeria, and according to the group’s spokesperson, Abul-Azeez Suleiman, the northern youth were concerned by IPOB’s recent threats.

“We became concerned that Kanu has finally crossed the boundaries of Nigerian laws and has blatantly breached international laws that specifically frown at the use of terror to achieve a goal”.

However, the group commended Acting President Yemi Osinbajo for adhering to the advice in its letter in which it pointed out the necessity of urgent action to curtail Mr. Kanu and his IPOB’s activities.
“Commendably, the Acting President initiated series of talks with regional leaders and made genuine moves towards ensuring lasting peace and stability,” the group said.

“We sincerely commend the efforts of the Acting President and those regional leaders who cooperated with him in dousing tension with the aim of creating a conducive environment for meaningful discussions.

“However, notwithstanding all these efforts by the Acting President and responsible national and regional leaders, Kanu and IPOB remain undaunted and even intensified their violent divisive campaign which is the main bone of contention.

The peak of the insolence came when Kanu publicly announced that he would order former President Olusegun Obasanjo and his entire family killed,” the group said.