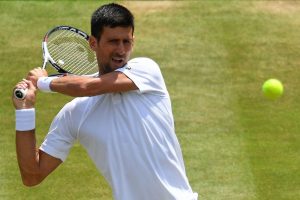 Former World Number One,  Novak Djokovic has been ruled out for the rest of the season with an elbow injury, he announced on Wednesday, AFP reports.

The 30-year-old Serb was forced to retire from his Wimbledon quarterfinal against Tomas Berdych earlier this month because of the problem, and will now sit out of next month’s US Open.

In a live Facebook video post from Belgrade, the former world number one said after suffering from the injury for a year-and-a-half, he had “made a decision not to play any competition, any tournaments” for the rest of 2017.

“Unfortunately, this is the decision that had to be made at this moment. Wimbledon was probably the toughest tournament for me in terms of feeling the pain that has escalated,” he said.

Between mid-January 2015 and June 2016, Djokovic won 17 of his 22 finals played in 24 tournaments. It seemed nothing could interrupt his dominance of world tennis.

But for months the Serbian national hero — now fourth in the world rankings — has been a shadow of his former self.

Since winning the French Open last year to complete the career Grand Slam, he has failed to claim another major title.