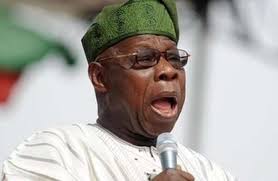 Former President of Nigeria, Chief Olusegun Obasanjo has said that the only way to stop another civil war in the country is the immediate removal of soldiers who have the backing of political office holder from the army in order to prevent the occurrence of another civil war.
According to report, the former president gave this advice at a public presentation of the book written by Haruna Yahaya and titled, “The First Regular Combatant: Brigadier General Zakariya Maimalari,” in Abuja on Tuesday, July 4.
Obasanjo said Nigeria has had enough of bloodshed and sacrifice and called for peace in the country. He noted that the presence of soldiers who had the backing of political office holders threatened the order in the military insisting that it has led to the killing of soldiers that would have been useful to the country.
He said: “Maimalari was a man who was very interested in the welfare of his men during a peacekeeping mission in Congo, a situation that led to him having issues with some few. He was a soldier’s soldier.
If Maimalari had lived to head the Nigerian Army, to the best of my own knowledge, Nigeria would have been better for it. “Lesson to be learnt from Maimalari’s death- this country had had trained officers who would have been of benefit to this country, but cut out at the prime of their lives, and our lesson should be that this should never happen again.
“To stop the sort of thing that took the life of Maimalari prematurely, all those assisted by political office holders should be eased out of Army so we can have an Army that will be completely free from political aberration.
“And since 1999, I think we have got it right, let us hope that we have got it right and learn the right lessons. Nigeria has had enough bloodshed, sacrifices and Nigeria deserves peace, unity and progress.
“And may be the sacrifices of the like of Brigadier General Maimalari be sufficient to give this country peace, development, unity and progress.”
Source: ( Gossip.naij.com)