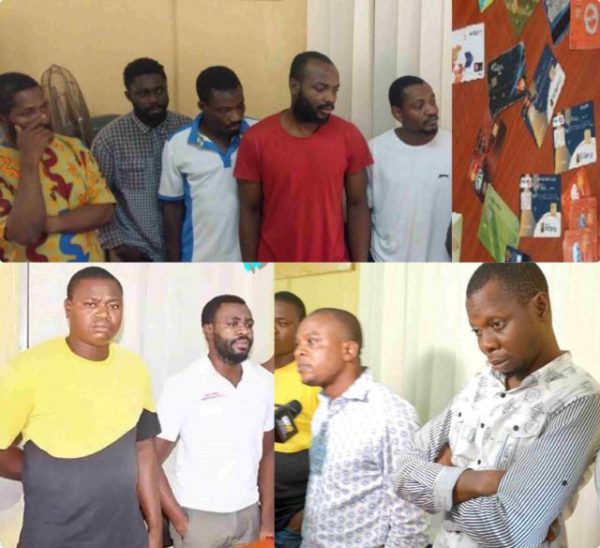 Operatives of the Police’ Special Fraud Unit (PSFU) Ikoyi, Lagos State, have arrested two employees of MTN, three bankers and six others for allegedly defrauding subscribers of over N150 million.

Chukwunonso Ifeanyi, 30, and Okpetu John, 29, who both confirmed they were MTN employees, were paraded alongside the bankers, Oyelade Shola, 32; Osuolale Hammid, 40; and Akeem Adesina, 33 by the spokesman for the SFU, ASP Lawal Audu.

The suspects were arrested ATM cards belonging to unsuspecting Nigerians, whose accounts were used to divert money belonging to those they defrauded.

According to the police, the suspects belonged to a syndicate that specialized in defrauding bank customers, who do not do Internet banking.

It was gathered that while the bankers supplied the details of customers with funded accounts to the gang, the MTN workers ensured that the victims’ mobile numbers, as well as those of people they had their ATMs were swapped for the duration of the crime.

According to Audu, blocking the numbers enabled the syndicate to fleece their victims without receiving SMS alerts. He said: “They usually carry out their operations at weekends and public holidays to avoid being detected by the bank monitoring mechanisms or the owners of targeted funded accounts.”