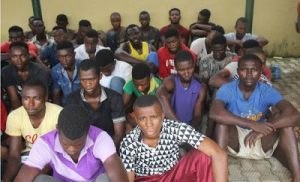 Over 100 suspects have been paraded by the Anambra State Police Command for various offenses such as robbery, cultism and child trafficking at the command headquarters in Awka.

The Commissioner of Police in the state, Garba Baba Umar while parading the suspects told journalists the massive arrests were made in line with his determination to rid Anambra state off criminal elements and restore the existing peace.

According to the CP, they arrested a child trafficking syndicate, armed-robbery suspects and recovered dangerous arms and ammunition.

Umar further disclosed that they arrested over 40 suspected cult members at various locations across the state and recovered fabricated double barrel pistol and six live cartridges among other weapons.

The suspects will all be charged to court upon the completion of the police investigation.