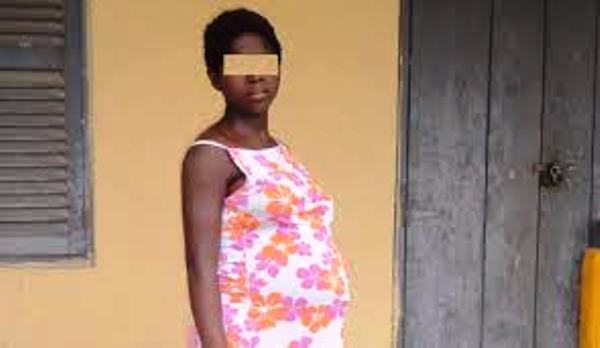 A pregnant Ghanaian teenage girl with, a child, claims that was forced into prostitution after her baby daddy denied her pregnancy.

A jobless teenage mother is set to have her second child two years after she gave birth to her first child.

Afia Nyarko claimed that she jumped into prostitution to support herself and her child after the man who impregnated her denied responsibility.

The expectant mother, who broke her virginity at age 11 said, she has been sleeping with about 15 men a day for money to feed her young family.

“I have been forced to go into prostitution because the man who impregnated me decided not to take care of us again. I have been doing this for the past years to survive” she said.

During a radio program in Ghana, Asia told host Kofi Gyimah Ankoana that she wants to learn a trade but lack support.

“I want to get a decent job so I can take care of myself and child but as I’m speaking with you I am pregnant again and can’t do anything now” she cried.

However, she blamed her mother for her current predicament because “she also got pregnant and did not know the man who impregnated her.”

Afia, out of anger, said she cursed her mother and she drove her from the house.