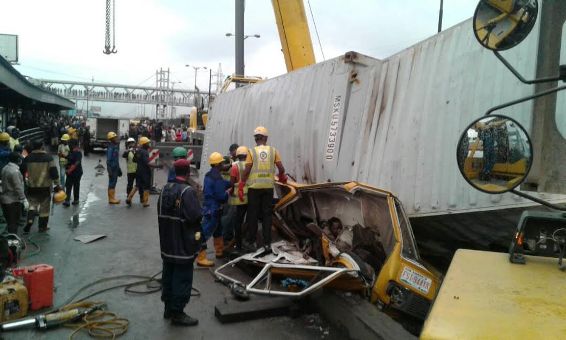 A pastor of the Redeemed Christian Church of God (RCCG), his wife, their two children and a church worker, were crushed to death by two containers yesterday in Lagos while on their way home from the monthly Holy Ghost vigil of the church, The Nation has reported.

It was also gathered that three other people were left injured and barely escaped from the tragedy. The man of God identified as Pastor Charles Ito and his wife Rosaline were killed alongside others. The names of the children and the church worker could not be immediately confirmed.

According to the report, the accident happened after two tyres of the truck carrying the containers unexpectedly lost pressure which made the vehicle tilt heavily on one side, just by the Bus Rapid Transport (BRT) terminal on the Lagos /Ikorodu road, Ojota.

The truck soon lost its balance, flinging the two containers down and on the mini bus in which the pastor and other victims were travelling. Five people died on the spot. Three others were trapped in the crushed bus.

Among those rescued were Olasunkanmi Adeogun of 133, Olatunji Street, Ojota, and another young man identified as Ifeanyi. All the victims are from RCCG Province 8, sources said yesterday.

They said the bus belonged to the late pastor. The scene was littered yesterday with dismembered human parts, which were later packed by rescue workers.

Eyewitnesses said the trailer driver fled the scene as soon as the accident occurred. His conductor was however apprehended and handed over to the police. Hoodlums who got to the scene early were said to have attempted to rob the rescue workers.

The saving grace was the police and NSCDC operatives drafted to the spot.

The accident triggered a traffic gridlock on the route and officials had to break the median demarcating the BRT lane to make way for the heavy duty equipment used in clearing the scene.

Commissioner of Police Fatai Owoseni who was at the scene confirmed that five persons were killed and three others rescued alive.

He said it was time people started obeying traffic laws, adding that apart from the truck’s bad tyres, it lacked capacity to carry the two containers.

He said: “We will spare nothing to arrest the driver of this truck. Even the truck owner, under the Lagos State Traffic Rules, has some questions to answer. We would focus attention more on people conforming with the law.”

He urged those who suspect that their relatives could be among the victims to go to Alausa Police Station for identification.

Also speaking, the General Manager LASEMA, Adesina Tiamiyu said: “Around 3:45am today (Saturday), our men got here after we received information that people were trapped in a bus that was smashed by container. We had to break the median for equipment to access the spot and we noticed that three of the persons trapped were alive.

“Fortunately, we were able to bring them out alive, while the other five who were already dead, have been evacuated as well.”

The agency, later issued a statement saying: “The agency’s emergency response team (ERT) received a distressed call regarding an accident at Ojota bus stop on the July 8, 2017, about 4:02am. This prompted the immediate activation of the agency’s ERT to the scene of the incident.

“The prompt intention by the LASEMA response unit led to the rescue of three victims who were taken to the Trauma Centre Toll Gate, while five dead bodies trapped in the bus were extricated and taken to Ikorodu General Hospital Mortuary.”