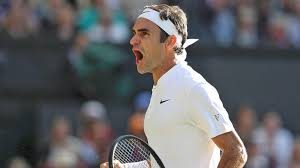 Federer said after the game, “I can’t believe it’s 100 matches, it’s a lot but I’m very happy my body has kept me going all these years,” said Federer who will face Berdych in Friday’s semi-finals.

“You have to make sure your average is as high as possible every day and I think I’m doing a great job this week.”

Raonic might have had the 140 mph serve in his locker, but Federer owns a magic wand he used to make the world’s sixth best player look like a lumbering also-ran.

“I was sort of moving on, let’s see if he can do it again. He kept doing it,” Raonic told reporters. “He kept a very high gear the whole entire time without giving many real glimpses.

“I think that was the most defeating thing.”

There was a slightly subdued atmosphere on Centre Court after home favourite Murray had hobbled to defeat against Querrey.

He will become the first man to win the title eight times if he qualifies and wins in Sunday’s final.