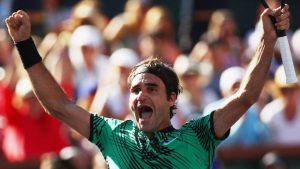 Roger Federer is just hours away from a historic eighth Wimbledon title after beating Czech 11th seed Tomas Berdych in straight sets in the semi-final.

“The way this tournament has unfolded I’ve been playing really great tennis.”

Federer has already added to his lengthy list of achievements by reaching a record 29th Grand Slam final, becoming the second-oldest man to do so after the 39-year-old Ken Rosewall reached the 1974 Wimbledon final.

Having waited five years to win his 18th major title at this year’s Australian Open, the Swiss could make it 19 just six months later.

“I feel very privileged to be in another final,” said Federer.

“I’ve got the pleasure to play on Centre Court another time. I can’t believe it’s almost true again. I’m happy to have a day off to reflect on what I’ve done at the tournament.”