Home News Feed See What Evil Husband Does To Wife To Stop Her From Studying...
Facebook
Twitter
WhatsApp
A husband who didn’t like that his wife wanted to start studying for a degree has cut off her fingers to prevent her from continuing because she didn’t have his permission. 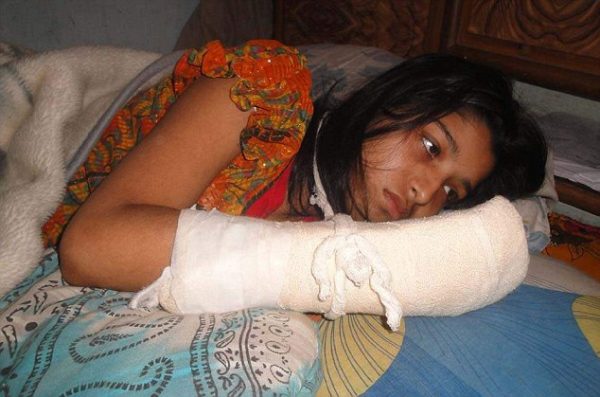 A woman has been left deformed after her husband reportedly chopped off her fingers in order to stop her from studying for a dregree.
Dailymail reported that the man who is now facing life in prison after chopping off his wife’s fingers because she began studying for a degree without his permission had tricked her by blindfolding her.
According to the police, Rafiqul Islam, 30, blindfolded his wife Hawa Akhter, 21, and taped her mouth, telling her he was going to give her a surprise present.
Instead he made her hold out her hand and cut off all five fingers. One of his relatives then threw Ms Akhter’s fingers in the dustbin to ensure doctors could not reattach them. Mr Islam, who is a migrant worker in the United Arab Emirates, had warned his wife there would ‘severe consequences’ if she did not give up her studies.
‘After he came back to Bangladesh, he wanted to have a discussion with me,’ Ms Akhter told The Times.
‘Suddenly, he blindfolded me and tied my hand. He also taped my mouth saying that he would give me some surprise gifts. But, instead he cut off my fingers.’
Mohammed Saluddin, the Bangladesh police chief said that Mr Islam had confessed after he was arrested in the capital, Dhaka, and will face charges of permanent disfiguration.
Human rights groups are demanding life imprisonment.
‘He was enraged. He was jealous because while he only had a grade eight standard education, she was off to college to pursue higher studies,’ said Mr Saluddin.
Ms Akhter says she is learning to write with her left hand and is determined to resume her studies. She is now back at her parent’s house.
The attack is the latest in a series of acts targeting educated women in the Muslim-majority company.
In June, an unemployed man gouged out the eyes of his wife, an assistant professor at Dhaka University, apparently because he could not stand her pursuing higher studies at a Canadian University.