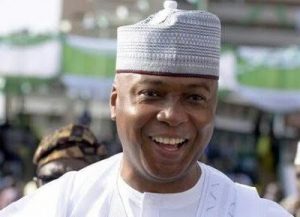 There was a bit of uproar on the floor of the Senate on Tuesday when a point of order was raised, that the Senate President, Abubakar Bukola Saraki be made the Acting President of the Federal Republic of Nigeria.

Some senators loyal to Saraki moved a motion calling him the acting president following the absence of Acting president Yemi Osinbajo and President Muhammadu Buhari in the country.

Being the number three man, the senators said he should assume the position of the acting president but wise counsel was allowed to prevail as Saraki refused to allow any of his supporters to second the motion.

The Senate, upon resumption from its 3 weeks break, received a communication from Professor Yemi Osinbajo, the Acting President of Nigeria, seeking the confirmation of Mr. Lanre Gbajabiamila, as the Director General of National Lottery Regulatory Commission.

The lawmakers, however, subjected the letter to deliberations, owing to the fact that the Acting President, had earlier reportedly said the Senate had no power to confirm nominees.

Senator Eyinanya Abaribe (Abia South), had raised a motion that the country had no President or Acting President at the moment, adding that, President Muhammadu Buhari and Professor Yemi Osinbajo were neither in the country, as at the time.

Daily Post reports that this was greeted with a counter point, coming through order 53 rule 4 of the Senate standing rules, by Senator Kabiru Marafa (Zamfara Central).

The Senate President, however, didn’t allow any seconder or more comments, even when Senators were agitating to support the motion. He quickly ruled Senator Marafa “out of order.”

The Red Chamber said the time has come for the Executive arm of government to obey its resolutions.

It also suspended all confirmation of appointments until compliance with its resolution.