Home Entertainment Shocking how crocodile returns body of a man it killed after it...
Facebook
Twitter
WhatsApp

This is the astonishing moment a crocodile clutches a missing man in its jaws after a witch doctor claimed he summoned it to return the body.

The missing man, identified as Syarifuddin, 41, was bathing in a river with friends when the beast pounced and dragged him beneath the water in Berau, Indonesia, on Tuesday at 6.20pm.

Desperate relatives reportedly searched in vain for him and it was assumed that he had been taken into the depths of the Lempake River when police failed to find him.

Villagers contacted a local black magic wizard who specialises in ‘crocodile witch craft’ and it’s claimed they cast a spell for Syarifuddin to be brought back alive. Incredibly, his body is said to have emerged yesterday morning.

The predator is purportedly seen floating to the banks with the naked body of Syarifuddin in its jaws as the gathered crowd looks on, in video footage from the scene.

It then dropped off the corpse sparking suggestions the saltwater crocodile, which can grow up to 5.2m as an adult, had actually been guarding the victim’s body from other predators seeing as it hadn’t been eaten. 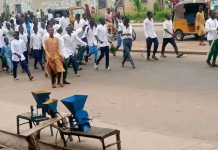