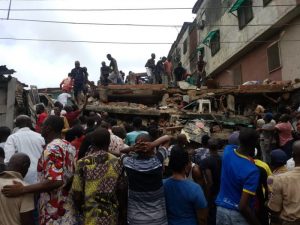 A four-storey building collapsed at Massey Street on Lagos Island on Tuesday around 2:30pm with many people trapped in the building, the death toll in Tuesday’s collapsed building on Lagos Island, has risen to eight, while 15 others have been rescued so far.

As at Tuesday evening, two dead bodies were evacuated from the building while 14 others were rescued alive.

But overnight and around 11.00am on Wednesday, six more dead bodies were recovered, making it six people who have died so far.

Officials of the Lagos State Emergency Management Agency, LASEMA and other emergency responders are still on site trying to see if more people were still trapped.

PM News gathered that an 11-year old boy was brought out alive from the ruins of the building around 4.00am on Wednesday.

General Manager, LASEMA, Adesina Tiamiyu confirmed that eight dead bodies had been evacuated from the building while 15 people had so far been rescued as at Wednesday morning.