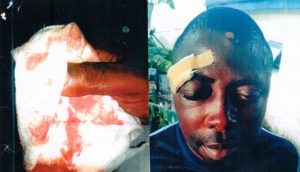 A pastor in Bayelsa state,identified as  Mr. Robert Gwegwe, has allegedly attacked the Secretary of the Civil Liberties Organisation, Bayelsa State chapter, Mr. Timi Igoli, by stabbing him in the eye.

The incident reportedly took place on May 29, 2017, at a mobile phone shop in Yenagoa. Pastor Gwegwe was said to have stabbed Igoli with a pen, following a minor argument between the two.

It was learnt that after the attack, which left Igoli’s right eye seriously affected, the matter was reported to Ekeki Police Division in the state capital. But the CLO has expressed anger at the incident as well as the alleged poor handling of the matter by the police.

The CLO in a protest letter sent to the Inspector General of Police, Mr. Ibrahim Idris, accused the police of allegedly shielding the accused pastor from prosecution.

The CLO stated, ”We have discovered that some of the officers at Ekeki Division have compromised and started shifting the case from one person to another. In the process, Igoli was being pressured to accept money in the presence of six relations of the detained Pastor but he rejected the offer.

According to Punchng, the organisation lamented that since the commissioner’s directive, a certain policeman at the station, had refused to hand over the case file since June 1, 2017, as ordered.

The CLO added, ”We wish to bring to the notice of the IGP Idris that the order given by the Commissioner of Police that the case be transferred to the SCID has not been complied with because of ‘vested interest’ of an officer for about three weeks.

We urge the IG to call on the Commissioner of Police to effect the order forthwith and order the police officer, who is aiding and abetting his friend, Pastor Gwegwe, to be ethical and professional in carrying out his job.”