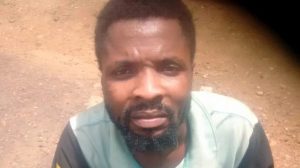 The Ogun State Police Command has arrested a 28-year-old suspect identified as Nurudeen Ogundairo, who claims to be  gospel artiste, for armed robbery. The suspect who was paraded at the Eleweran police headquarters in Abeokuta, confessed that he took to a life of crime just to make money to finance the production of his gospel album. Ogundairo who was paraded alongside 36 other robbery suspects, said he had planned to launch the album on July 24, 2017.
While confessing to his crimes, Ogundairo who said he now regrets his actions said: “I am a gospel musician. I needed money to enable me produce my maiden album and I got involved in robbery to raise money for the project. In fact, I had picked a date of July 24 to release the album to the public after the production.” “I hope I can still be forgiven by the police and God over my action. It was in a bid to make headway in my musical career that I took to robbery.”
While parading the suspects, Ogun state police commissioner, Ahmed Ilyasu, said Ogundairo and two of his boys were arrested at their hideout at Joju, Ota, following a tip-off from informants. He also said a laptop, a locally made pistol and six Iphone‎ handsets, were recovered from the suspects.
Source: ( Gossip.naij.com)