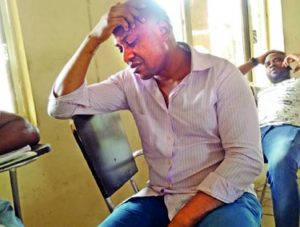 According to the latest Police investigation concerning the case of billionaire kidnapper, Chukwudumeje George Onwuamadike popularly known as Evans, it was revealed that a police officer identified as Tina who is still in active service helped the kidnapper escape in 2006.
The Nation reports that a Special Investigation Panel constituted by Inspector General of Police, Ibrahim Idris to probe Evans’ 2006 arrest and eventual release found out that the so-called Tina was not only in active duty but has also risen to the position of a Chief Superintendent of Police.
The senior police officer whose name has been concealed to protect him from prosecution, had said the robbers went somewhere around the National Arts Theatre, Iganmu, to share the loot.
The source said while sharing the loot, the robbers had a disagreement and shot one another. Seven members of the gang reportedly died instantly while three of the suspects, including Evans were arrested.
The senior officer said his team also went to Mbidi police station, Imo state, for investigation, where two other gang members were arrested. He however, said a police woman identified as Tina at the Band Section of Police College, Lagos pushed for Evans’ release on the grounds that he was her brother.
“There was a police woman at the Band Section of Police College, Lagos, Tina, who insisted that we dropped the case as Evans was her brother. She traveled to Imo state. Not long after she returned, we got a message from the Imo state police command that the command had been searching for Evans and requested we transferred the case.”
Evans has also reportedly confessed to the 2006 armed robbery attack on a bank and the shooting of seven persons.
Source:( Gossip.naij.com)
Advertisement