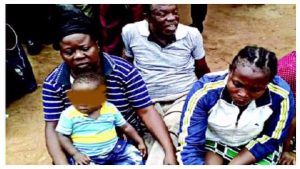 A woman identified as Chioma Fidelis , has been arrested for selling her baby, Favour Fidelis, in exchange for half a bag of rice, chairs, provisions and some bags of cement for her to build a house.
The young mother who hails from Ehime Mbano local government area of Imo confessed to the crime when she was paraded along with other suspects by Mr Chris Ezike, the commissioner of police in Imo state.
The commissioner of police revealed that the arrest of the child traffickers was done on Monday, July 10, 2017 by some members of the surveillance team. Fidelis was arrested along with forty other suspects.
“I got pregnant by mistake. I did not know when the thing entered. When I born the baby I did not have money to take care of him.
“So I decided to sell the child. They told me that they sold the child for Seven hundred thousand naira. I did not collect any money from them. They gave me half bag of rice, chairs, provisions and bags of cement which I used to repair my house,” Fidelis said.
A 34-year-old woman identified as Mrs Chidinma Unakala Mgba from Mbomiri in Mbaitoli local government area of Imo was also dragged into the plot as she was assisted in the selling of the child. Mgba said the mother of the child had complained about her responsibilities.
“When the mother brought the baby to me and I took the baby to the hospital and the hospital confirmed that the baby was suffering from kwashoko. “From there, I started taking him to various churches to get healing and I succeeded. I spent one hundred and thirty seven thousand naira. I spent two hundred thousand naira on the mother.”
The buyers of the child were identified as Mr Jonas and Salomi Anyanwu from Umunakanu. The woman confessed to the crime too stating how she and her husband ended up with the baby.
“It is true that my husband brought the money that we use in buying the child. Let me tell you, because we need the child my husband had to borrow money, 700,000 and give it to Chidimma, and collect the child.
“I wanted to reject the child but because of God I collected the child and started training him,” she said.
Source: ( Naij.com )