Deolu
The official Facebook page of the General Overseer of the Synagogue Church of All Nation (SCOAN) has shared the story and confessions of a Nigerian man who is a notorious human and drug trafficker deported from America. 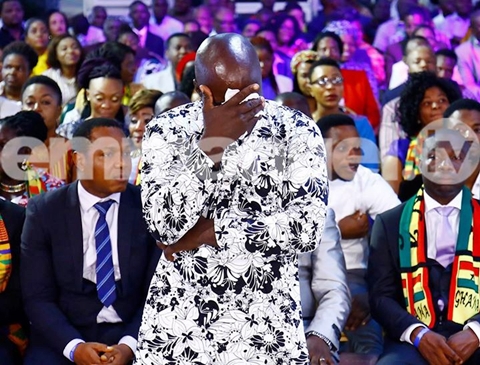 “I SOLD MY LIFE TO THE DEVIL” – CONFESSIONS FROM A HUMAN TRAFFICKER!
The sirens blazed. Helicopters hovered. An elite troop of special agents steadily surrounded. No escape in sight. Flushing the remaining cocaine steadily down the drain, Mr Muyideen braced himself for the inevitable.
Fearlessly brandishing his multiple firearms, he threatened the police below that if they dared move, he would jump to his death. Jump he did…
At a tender age, Mr Shittu Muyideen was initiated into a world of devilry. His father, a prominent Nigerian known popularly as ‘Red Scorpion’, gave him the deadly insect’s mark on his arm – a symbol of demonic power which would ultimately lead him down a path of untold destruction.
As the only son of his father, who had 16 wives and 47 other daughters, he was a fighter from day one.
In school, he could beat up 20-30 grown men at a go. That spirit of violence led him to fearlessly travel abroad and engage in a life of criminality to extreme degrees.
Traversing from Nigeria to Libya, he crossed the ocean in a makeshift boat to arrive unceremoniously in Italy. It was there that the wickedness of the devil’s plans for his life began to fully hatch.
Dealing in drugs and human trafficking, Muyideen, known then as ‘CK’, became a friend of Europe’s most deadly and dangerous. “I would sell human beings without a trace,” he admitted.
“I would sell young women to old men,” he explained, adding that the women concerned would later ‘drug’ such men into willing their entire belongings to them. CK would take fifty percent.
Arrested during one such shady operation, he was imprisoned but through “Mafia connections”, he was quickly released and relocated to Germany. There, Muyideen became a notorious ‘drug baron’.
His methods of human smuggling became more advanced, this time arranging marriages for naïve German locals with men who would quickly divorce thereafter and take money from the inevitable proceedings.
He even conned physically challenged women by promising to provide husbands – who would leave them shortly after concluding marital nuptials.
Escaping prison again in Germany, he went to the US where he affiliated himself with a notorious drug lord and his gang. With the proceeds from his dubious activities, he bought properties in different states in the US and married a Norwegian banker with whom he had two kids.
When asked where he was getting his money from, he told her that his father was a wealthy king in Africa!
However, one day his wife opened a package that was delivered to their house and she was horrified to find cocaine hidden therein. Shocked, his wife reported to the police who quickly surrounded his house. Jumping from a balcony, Muyideen was caught by a net dropped by the helicopter and hauled into custody.
Deported back to Nigeria, the drug baron never relented in crime. Moving to Ghana, he began to co-ordinate human trafficking activities to countries around the world.
It was in the midst of this that ‘CK’ discovered Emmanuel TV. Deciding to visit The SCOAN, his encounter with Prophet T.B. Joshua was nothing short of remarkable.
The demon within him was wickedly exposed at the touch of the man of God, confessing the havoc it had wreaked in his life and the destruction it had caused him to do.
After deliverance, the sober man tearfully admitted that satan had used him to destroy so many lives in the past, calling on people to embrace Christ fully as the only way to enjoy life in abundance.