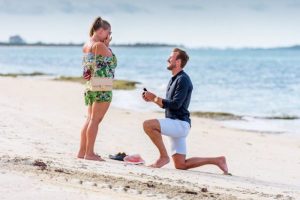 Tottenham Hotspur,  striker Harry Kane has proposed to girlfriend Katie Goodland , according to the Mirror, the pair have been together for five years and had their first child, Ivy, in January.

And during their family holiday in the Bahamas, the England star got down on one knee.

He revealed the good news on social media with fans sending their congratulations to the happy couple.

Earlier this week, Kane posted a snap from their luxurious yacht alongside Katie and little Ivy.

Spurs’ players return to pre-season training on Monday, although Kane may be afforded an extra few days rest after playing for England over the summer.

The striker also starred in Spurs’ kit launch on Saturday.

Mauricio Pochettino’s men have joined forces with American giants Nike, after their five-season-deal with Under Armour came to an end.

It’s understood the deal is worth around £30 million-per-year to the north London club.

Kane, who captained England earlier this summer, has attracted interest from Manchester United.

He has won back-to-back golden boots in the Premier League, with Spurs demanding over £100m for their talisman.