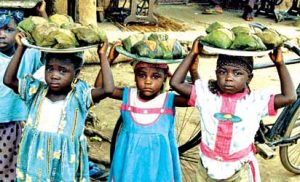 The stakeholders said that child-hawking, especially after school, was against the Child’s Right Act. (2003) which prohibits child-hawking and an abuse of the rights of the child.

Section 30(2C) of Part III of the Child Rights Act (2003 ) states that: “A child shall not be used for hawking goods or services on main streets, brothels or highways”.

Subsection 3 of it further states that ‘’A person who contravenes the provisions of subsection 2 of this Act commits an offence and is liable, on conviction, to imprisonment for a term of 10 years without an option of fine.

Mr ‎Vitalis Anyadike, Executive Director, Africare Development Focus International, said that any child hawking on the streets had been exposed to dangers.

“When you send a child to hawk on the streets, it is against the Child’s Rights Act which says; no child under 18 should be hawking during school or after school.

‘’It states that rather that child should be in school.

“The moment you send a child to hawk you are exposing that child to dangers, such as abuse, rape and abduction. Also the child can fall into the hands of child traffickers.

He said poverty was a major reason why some parents sent their children to hawk so that the proceeds from such effort could be used to run the home.

“When you look at the economic situation, there is poverty because government cannot provide everything, so parents have to devise a means of survival by sending their child to hawk‎”

He noted that civil society groups and NGOs had been educating parents, through sensitisation programmes, on the Child’s Rights Act and the dangers of subjecting their children to street hawking.

“We do a lot of sensitization because most of the parents are ignorant of the Child’s Rights Act; they do not know what it contains.

“ So through television and radio programmes, we sensitise them to know that every child has some rights and by sending that child to hawk on the street, you are abusing such rights’’.

Contributing, a lawyer, Mrs Stella Benjamin, stated that asking children to hawk anything on the streets was against the Child’s Rights Act.

According to her, hawking is against the child’s right act because by allowing a child to hawk, parents are exposing them to danger especially now that the incidents of rape and kidnapping are on the increase.

“Hawking is clearly against the intent of the law and this days rapists are more interested in children especially infants.

“Instead of hawking, parents can have a small kiosk where the child can assist in helping the parents or guardians sell rather than exposing them to dangers on the road”.

Benjamin also said that children could easily be knocked down by vehicles or motorcycles during street hawking, describing the development as very common occurrence.

A teacher, Mrs Arinola Adekemi, said that children were not aware of their rights so they did not know that hawking on the streets was a form of abuse. ‎
‎

According to her, only a few children are lucky to hawk and also go to school, but majority drop out of school in order to support their families.

Adekemi said that government had a role to play in sensitising parents and children on the various dangers associated with hawking.

“Teachers should do more by informing the children of their rights, so that when these rights are being infringed upon, they will know, she said.”

She also urged government at all levels to address social ills such as child labour, street hawking and cultism which ultimately affect the growth and development of the child.
‎
A Civil Rights Activist, Ms. Abimbola Olamide, called for increased participation of children on issues affecting their lives for have positive and far reaching effects on their health and socio-economic conditions.

“When children participate in decision-making process on issues affecting their lives, they will be more creative, positive and energetic, offering ideas devoid of prejudices and stereotypes, she said.”
She called on her colleagues to know their responsibilities, especially in terms of psychology and principles of education so that they could make the right impact on their pupils or students.

Olamide also noted that some punishments meted out by parents, guardians and teachers on children were outrageous and needed to be addressed in the overall interest of the victims.