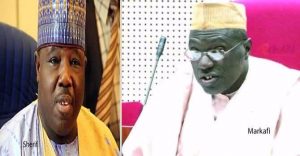 Ali Modu Sheriff  has been sacked as the National Chairman of the PDP by the Supreme Court,a  five-man panel of the apex court led by the Chief Justice of Nigeria, Justice Walter Onnoghen, in its judgment delivered on Wednesday, reinstated Ahmed Makarfi, earlier sacked by the Port Harcourt Division of the Court of Appeal, as the National Caretaker Committee.

Reading the lead judgment of the Supreme Court, on Wednesday, Justice Bode Rhodes-Vivour, held that contrary to the majority judgment of the Port Harcourt Division of the Court of Appeal, the suit filed by Makarfi faction before the Federal High Court in Port Harcourt was not an abuse of court.

The judgment of the apex court was unanimously agreed to the lead judgment by Justice Rhodes-Vivour. Other members of the panel are, Justices Onnoghen, Tanko Muhammad, Kayode Ariwoola and Dattijo Muhammad.