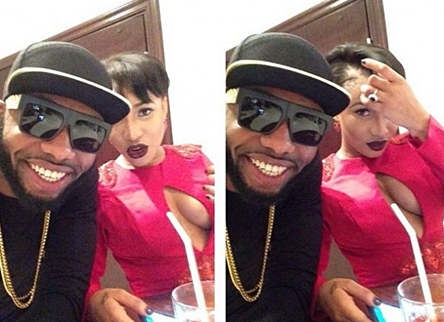 According to sources, the actress got mad after the award wining stylist did not stand by her during her trying times with her former husband Churchill.
Recall that Tonto named Swanky Jerry as her Brides man (Male version of Brides maid) for her 2015 wedding with her ex-hubby, Churchill. Toto Dikeh also had a dirty social media fight with Toyin Lawani over Swanky.
Their breakup story gained weight after Tonto Dikeh didn’t wish him a happy birthday on Instagram yesterday and later unfollowed him on the platform! Swanky however, unfollowed Tonto Dikeh earlier today on Instagram too.
A source alleged that, Swanky is a “fair weather” friend and Tonto is sick and tired of such attitude, while another claimed “Swanky doesn’t want Tonto to hurt his brand with her messy divorce saga”
Whichever way it is, we hope and pray they get back stronger and their is nothing like TRUE FRIENDSHIP!