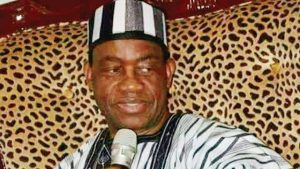 James Ayatse,the Tiv ruler  on Monday advised his subjects against high bride price, saying that the practice was hindering young people from settling down.

Mr. Ayatse gave the advice in a statement issued by his Media Assistant, Freddie Adamgbe, and made available to the News Agency of Nigeria, NAN, in Makurdi.

According to the statement, the monarch spoke against the practice at a reception organised in his honour by his kinsmen, the Shangev-Ya Development Association in Kwande Local Government Area.

Mr. Ayatse said that the Tiv Area Traditional Council would soon partner the church and relevant stakeholders to cut down the exorbitant bride price in the land.

He also said that the council would make a law to prevent people from lavishing money for burial ceremonies.

He further said that only cultural values of economic and social benefit to the people would be promoted while those with retrogressive tendencies would be discouraged.

He challenged preachers of the Gospel to intensify the spread of the word of God in Tiv nation.

The Tor Tiv also cautioned youth against disrespecting elders and perpetrating violence in Tiv land and called for the cooperation and understanding of all and sundry.

He gave an assurance that the multifaceted challenges confronting Tiv nation would be properly addressed during his tenure.

The traditional ruler reiterated his earlier stance to remain apolitical and a father to all Tiv sons and daughters while urging other traditional chiefs to also remain neutral.

While enjoining his subjects to stand on truth and justice always, the Tor Tiv warned the warring communities of Mbaikyaa and Dzer to sheathe their swords or face sanctions.

Meanwhile, the National President, SHADA, Terkimbi Ulaka, described the emergence of Mr. Ayatse as the fifth Tor Tiv as divine.

Mr. Ulaka said that his antecedents are proof that he would take Tiv nation to the desired level.