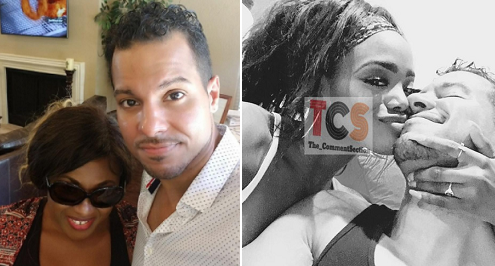 Uche Jombo and Kenney Rodriguez are still a couple despite damaging reports that her marriage to the US-based Puerto Rican husband was in trouble.

Recall that an unknown person leaked the photos of Kenney looking really coupled up with a woman said to be 22-years-old. And some of the photos seemingly were taken in Kenney’s home, same one he shares with Uche whenever she visits the United States.

The rumours came just after folks discovered that the actress had removed her husband’s family name ‘Rodriguez’ from her Instagram bio, plus the fact that she did not mark her 5th wedding anniversary on May 16 as had been her tradition.

Though Uche clarified later that she removed the name because she wanted to keep her family away from her social media, she never addressed the alleged cheating rumour.

However, the actress is currently in the United States and from the photo shared by Omoni Oboli, she is with husband. They intend to visit Canada for group vacation.

Stirred by this latest update, other actresses, including Tonto Dikeh and Chioma Akpotha, are celebrating the actress.