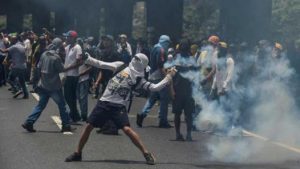 The power struggle between Venezuela’s President, Nicolas Maduro, and the opposition claimed another victim, days ahead of a vote anticipated to plunge the country further into chaos.

A 30-year-old man was killed during clashes between protesters and security forces in the town of Ejida, in the western state of Merida, authorities said, bringing the death toll in almost four months of protests to 102.

Many Venezuelans were taking part in a 48-hour general strike which started on Wednesday, in protest at Sunday’s vote to elect members of an assembly which will be tasked with rewriting the constitution.

The opposition says the creation of the assembly is a bid by Maduro to turn the country into a dictatorship.

In response, Maduro announced fresh honours for those targeted by the sanctions, including the head of the national electoral council, Tibisay Lucena and the human rights ombudsman Tareck William Saab.

“I will bestow a very, very special honour on this group of Venezuelans,” Maduro said, calling the sanctions “shameless measures.”

The oil-rich country is currently mired in an economic and political crisis, with the highest rate of inflation in the world and chronic shortages of basic goods.

Also on Wednesday, Colombian airline Avianca became the ninth airline to announce it was ending flights to the country, citing safety reasons.