Home National News Venus Williams breaks down in tears over the death of man she...
Facebook
Twitter
WhatsApp 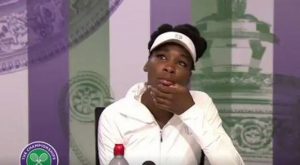 It was all tears for the former Wimbledon champion Venus Williams after she was questioned by reporters about a Florida car crash in which a man died.

Venus could face a wrongful death lawsuit from the family of the man, after she was accused by police of being at fault for the collision.

She spoke after beating Elise Mertens in the first round at Wimbledon.

On the crash, Williams said: “There are no words to describe how devastating [it is]. I’m completely speechless.”

She then began crying, and left the room to compose herself before returning to answer another couple of questions on the match, BBC Sports reports.

The collision, which happened on 9 June, caused the death of Jerome Barson, 78.

Earlier in the news conference, Williams said: “Tennis is still the love of my life. It gives me joy.

“I have no idea what tomorrow will bring. That’s all I can say about it. That’s what I’ve learned.”

A rain delay on Court One then halted the progress of the American 10th seed after Mertens saved two match points.

Mertens, playing her first Wimbledon, held and saved a further two match points before Williams produced an emphatic shot to secure a 7-6 (9-7) 6-4 victory.

Williams, making her 20th appearance at Wimbledon, opted against playing in a grass-court warm-up event after her fourth-round defeat at the French Open.

She easily beat Mertens 6-3 6-1 in the third round at Roland Garros, but they were evenly matched in an entertaining first set before the Wimbledon debutant sliced a backhand into the net to settle the tie-break.

The American took control with three straight games to lead 4-2 in the second set, keeping her composure after Mertens’ late resistance and the rain break to set up a second-round tie against Wang Qiang of China, who beat Chang Kai-chen of Taiwan 6-3 6-4.