Home Trending Wao! See What Soldier Did a Day After Being Dismissed from Army...
Facebook
Twitter
WhatsApp 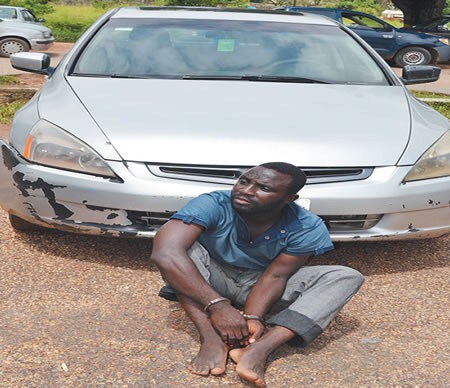 A dismissed soldier, Obadiah Ayuba, has been arrested by the Oyo State Police Command for stealing his friend’s car in Ibadan.

The man was dismissed by the Nigerian Army after a series of unprofessional actions, including robbery and absconding from duty.

Parading him in public at the state police headquarters in Ibadan on Friday, the Oyo State Commissioner of Police, Abiodun Odude said Ayuba fled with the car and was arrested five days after. He committed the crime a day after he was dismissed from the Nigerian Army.

“The suspect was arrested by operatives of Operation Burst along the Oyo-Ibadan Expressway and handed over to the police,” Odude said.

Ayuba said he had gone to a night club in Ibadan with his friend, Abubakar, on June 15, 2017 and that after he (Abubakar) told him to drop a female friend, he decided to abscond with the car.

Ayuba said, “We went to a night club and left around 3am. He said he wanted to see his mechanic, who was repairing a vehicle for him.

“We headed to my friend’s mechanic workshop and decided to sleep in the car until morning. He later left me and a female friend of his in the car while he went to see the mechanic. When the lady was complaining, I called him and explained to him that she wanted to go home.

“He told me to help drop her at home and I did so. That was how I absconded with the car. I used it as taxi to earn some money. When I was arrested, some passengers were in the car. I served at the 81 Batallion, Mokola, Ibadan before I was dismissed on June 14, 2017 after a court martial.”