I Went Into Kidnapping to Make Money Like Evans – Bricklayer 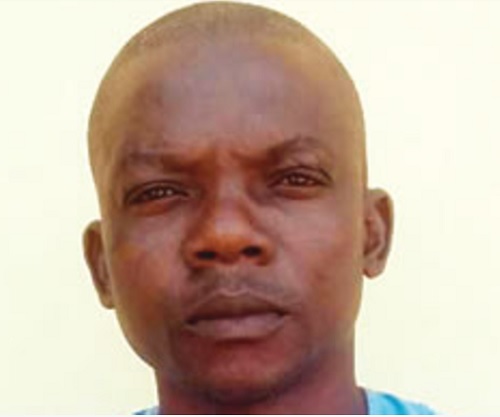 A 44-year-old bricklayer identified as Mukaila Alatunse, who attempted to kidnap his neighbour, Precious Ogundiran, a student who lives with her parents at Lemode, in the Ijoko area of Ogun State, has been apprenhended by operatives of the Nigerian Police in the state.
According to a report by Punch Metro, the kidnap suspect was said to have discussed his plan to abduct Ogundiran with a vigilante in the neighbourhood, telling him that they could get as much as N5m ransom from her parents because the victim is the only child of the family,
It was gathered that the vigilante played along with the father of seven, and later divulged the plan to Ogundiran’s father, a lecturer at the National Open University of Nigeria on Victoria Island, Lagos State, who reported the case to the police at the Agbado division, leading to the arrest of the suspect on Monday.
While speaking to a correspondent, a source said that a team of detectives, led by the Divisional Police Officer, CSP Sunday Ominijo, laid in ambush at a hotel in Agbado, where Alatunse and the vigilante had agreed to meet.
The source said, “The police team asked the vigilante to call the suspect on the telephone, and tell him that the lady had been kidnapped. He agreed to come down to the hotel so they could contact the father for a ransom. The father is a senior lecturer at NOUN.
“While he was with the vigilante at the hotel, the team hanged around. The vigilante told him that the victim had been kept somewhere and that they should discuss about the ransom.
“He said they would request N5m from the lecturer and that he would take 60 per cent of the money while the vigilante would get 40 per cent. The operatives swooped on him in the process. He has confessed to the crime.”
While also speaking in a chat, the native of Ikire, Osun State, owned up to the botched kidnapping, saying he took to the crime after hearing the news of how the notorious kidnapper, Chukwudumeme Onwuamadike, aka Evans, made millions of dollars from kidnapping.
He said he got Ogundiran’s phone number and some other details from a shop owner in the area, adding that the trader was not aware of his plan.
He said, “I am also a commercial motorcycle rider and the vigilante rode on my motorcycle on June 16 in the evening. We were discussing how kidnapping had become a way of making quick money. I explained to him how Evans made a lot of money from kidnapping and suggested we should also try our luck.
“I told him that I knew a lecturer, who had one child, and that we would make millions of naira from the man if we kidnapped his daughter. He said he was also interested and we exchanged contacts. He asked me to provide him with information about the girl, especially her phone number, while he promised to look for more persons to facilitate the kidnapping.
“It was on Monday that he called me on the telephone that the girl had been kidnapped and that I should come to a hotel in Agbado to discuss the ransom. We were in the hotel when the police arrested us. On getting to the station, I realised that it was a set-up.”
Alatunse said things had been difficult for him and his family in the last three months and that he wanted to use the ransom to assuage his suffering.
“I have seven children with two wives. One of my wives died recently and I don’t have money to take care of the children. This is the first time I would attempt kidnapping. I am appealing for mercy,” he added.
Share
Facebook
Twitter
WhatsApp
Previous articleThis pretty lady is searching for husband, shares photos on Twitter to show seriousness
Next articleDaddy Showkey cries out over alleged ‘Badoo’ attacks in Ajegunle
- Advertisement -