Deolu
As heavy rainfall continue to descend at the commercial city of Lagos for several hours which has caused massive flood around the city, a foreigner has been seen paddling his canoe inside the flood. 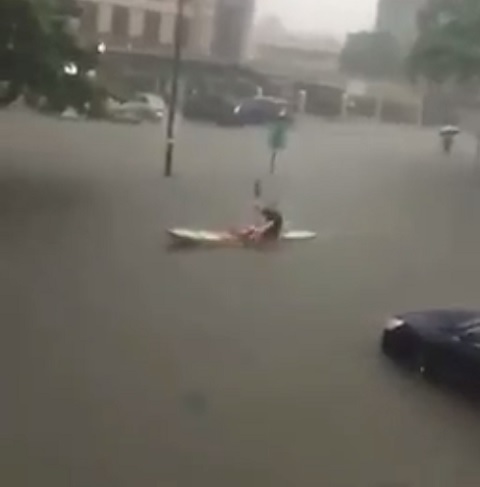 From the mainland to the luxurious island in commercial city Lagos state and many other communities in the state are experiencing massive flooding as a result of heavy downpour which started since Friday till Saturday and lasted for several hours .
Worst hit is the Lekki area, along Lekki-Aja Highway, as well as the Victoria Island area of Lagos as most residents are complaining that the flood is so massive and are unable to leave the area for their workplaces.
The Lekki axis is a few kilometer from the Lagos Lagoon as residents are asking the Lagos State Government to come to their rescue as they are helpless and have remained indoors.
A video emerged earlier today which was filmed in front of the popular Silverbird entertainment centre in Victoria Island where a foreigner was seen paddling his canoe inside the flood.
Watch the hilarious video footage below;