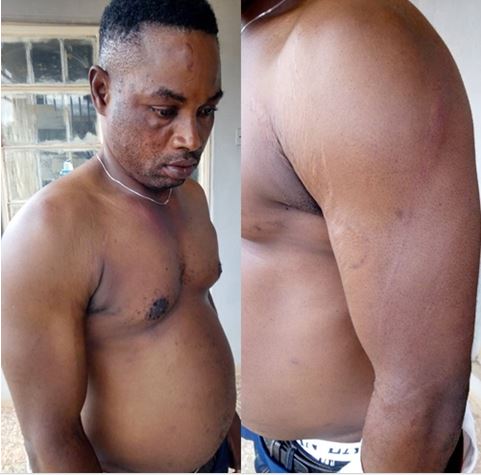 A Nigerian man has allegedly been beaten up by a white man because of his resistance to the disconnection of his electric wife after he failed to pay his bills.

This report below was given by Eko Civil Society Group.

Earlier today, a white man working with the Benin Electricity Distribution Company (BEDC) orders Military personnel attached to him to beat up one Mr. Innocent Okpara over resistance of the electricity company officials to take his expensive wires after disconnection for non payment of electricity bills.

This happened behind Santana Market, Sapele Road, Benin City in the presence of the Business Manager, a Nigerian in charge of the business unit that covers the area. The man has been disconnected for owing the company an amount he said could not be justified, his argument was that, he bought the wires with his money and that it does not belong to the private company hence, he was not going to allow them to take away the expensive wires.

Similar reports have reached the human rights community of the activities in the past of same white men who go about with military personnel to harass, intimidate, humiliate, brutalize and in some cases threaten to shoot citizens of the Federal Republic of Nigeria over electricity issues. Such case was that of one Mr. Owas Evbuomwan about a month ago in Oluku-Iguosa axis who was threatened by military personnel attached to another white man working with BEDC to shoot if he dares question the authority of a white man in threatening a Nigerian like him. It should be noted that there are three of them working with BEDC and they all exhibit the habit of creating fear and tension in the minds of Nigerians thereby making Nigerians look like cowards in their own land.

Reports have been passed to the 4 Mechanized Brigade, Benin City severally on the activities of soldiers who molest and assault citizens and no action have been demonstrated to show there is still value for human rights even in a democratic dispensation like ours. A lot of such incidences are archived with pictorial evidences and victims are readily available to testify of military brutalization and assault on their persons without direct provocation that warrants same.

It is important for Nigerians to still know if our leaders have finally handed over the life and destiny to foreigners or this is another round of colonial rule using our military to achieve.

The Edo Civil Society Organisations will stop at nothing to mobilize all other Nigerians to resist any form of colonial tendencies even if our leaders are docile and non chalant about it. We cannot tolerate it, because Nigerians in the Diaspora cannot try what these white men are daring here.

To this end, we are demanding a full scale investigation into the activities of these white men working with BEDC to the extent that whether they possess such rights in line with our constitution to command our military personnel to unleash terror on citizens. We cannot be slaves in our own land because these white men are here to elk a living for themselves and another round of colonial tendencies we shall resist even with the last drop of our blood. The most stupid Nigerian at least deserves some respects from a foreigner in his land.

We own the Land.

INNOCENT OKPARA DEMANDS JUSTICE FROM THE NIGERIAN GOVERNMENT, THE HUMILIATION ON HIM BY A FOREIGNER IS TOO MUCH.

WILL THE NIGERIAN GOVERNMENT ACT?