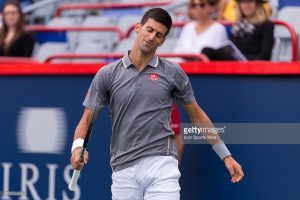 Former World Number 1, Novak Djokovic retired from his game against Czech Tomas Berdych on Wednesday with an elbow injury during his quarter-final against .

The second seed had lost the opening set and was down a break in the second 7-6(2) 2-0 before he walked to the net and shook his opponent’s hand.

Djokovic said his right elbow had been bothering him for over a year and a half and that he had been feeling pain from the beginning of the tournament.

“The intensity and the level of pain were not decreasing. It was only increasing as the days went by,” he said. “Unfortunately, today was the worst day.

“It’s unfortunate that I had to finish Wimbledon, a grand slam, this way,” he added. “I mean, if someone feels bad about it, it’s me. But, you know, I tried.”

He also said the postponement of his last-16 match against Adrian Mannarino might have played a role.

The match was pushed a day to Tuesday because of the marathon five-setter in which Gilles Muller beat Rafael Nadal on Monday.

“Probably the fact that I played yesterday (Wednesday), kind of days adding up, as I’ve said before, it wasn’t helping at all,” he said.

The retirement is a another blow for the former world number one, who has surrendered his Australian and French Open titles this year and slipped to fourth in the world.

The result means the 31-year-old Berdych has reached the semi-finals for the second year running.

The Czech has also broken a streak of 12 losses against his tormentor-in-chief Djokovic, whom he had previously only beaten twice in 27 matches.