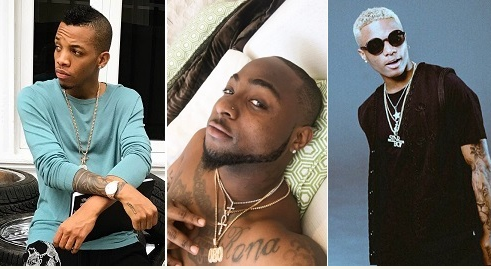 Wow! The beef between Wizkid and Davido seems to be getting more interesting as Tekno has become the new ingredient in the barbecue. As we all know, the three singers are internationally signed; this has led to a quest to be labelled the best musician out of Africa. No doubt, all three cats are hit makers, but Wizkid seems ahead of the others Internationally. While he’s going on tour with Chris brown and Future and also getting featured by top American musicians, much is yet to be heard on Tekno’s International deal while Davido has returned to his roots to make music the way they want after almost having his style changed to meet the International standard, according to him.

Tekno jumped into the beef equation yesterday when he tweeted that the best International Artiste will soon be known. Fans on social media saw that as a shade at Wizkid or Davido or at the both of them. Many say he’s just pained that Wizkid edged him and Davido to emerge the Best International Act at the BET Awards. Well, Wizkid has dropped a shade that seem too be directed at Tekno, or Davido inclusive. See tweets below.