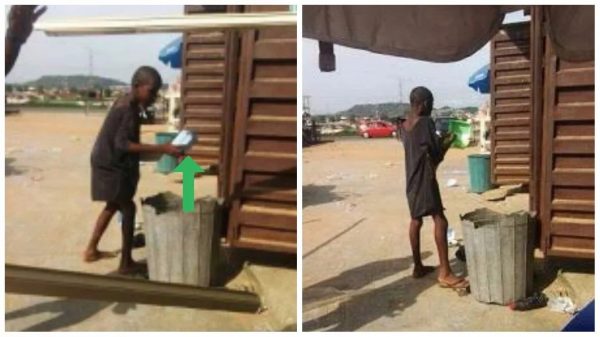 A Young boy spotted scavenging for food from a refuse dump. The boy spotted in Suleja, Niger State.

A Facebook user, identified as Precious Bliss, posted his pictures on the platform and disclosed that she saw the boy eating from a takeaway pack.

On Thursday, July 6, took to her social media page to post pictures of this unknown boy with the caption:

“Young boy eating from a refuse bin in Suleja, Niger state. A Facebook user who traveled to Niger state saw the young boy scavenging for food from a trash bin.

“I was just seated outside today at Aluminium village Suleja, Niger state when suddenly I say this young guy put his hands in the waste bin and brought out disposed takeaway pack and started eating the remains, I had to secretly snap him.

Silver or gold I don’t have but I gave him the little I had to purchase food from any nearby mama put…God help your children.

WHO DO YOU BLAME FOR THIS, GOVERNMENT OR PARENTS?”