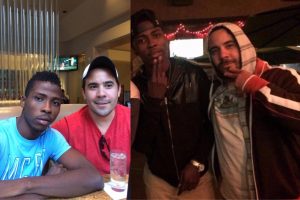 Super Eagles and Manchester City Striker, Kelechi Iheanacho might be  facing up to two years in jail in the US after allegations were made against him that he may have misled a court in Pennsylvania.

Iheanacho, 20, is facing legal battles with his previous representatives, American-based First Eleven Management, after pulling out of a contract with them two years ago to sign with Stellar, who look after Real Madrid’s Gareth Bale.

Iheanacho filed pleadings that denied he knew or spent time with Henry Galeano (pictured with him above), who separately claims he is his former agent. Iheanacho claimed he believed Galeano was an alias used by First Eleven Management co-owner Robert Zanicky.

New Yorker Galeano was the company’s registered Fifa-licensed agent. SunSport and the American court have been handed a series of photos and documents which suggested the duo met on many occasions and will require an explanation from the footballer.

The crucial legal question for Iheanacho will be whether he did more than merely meet Galeano or happened to be with him on occasions. It certainly seems clear they at least met.

Under Pennsylvania Law, if it is found Iheanacho knowingly tried to mislead the court, he could be charged with unsworn falsification — which, if found guilty, carries a penalty of up to two years in prison.

And with an impending £25million move to Leicester on the cards, his new club will want assurances that his case in the US is being properly handled and will not become a ticking time-bomb.

In his court affidavit, Galeano said: “For the avoidance of doubt, Iheanacho and I have spent hundreds of hours together Robert Zanicky never used my name as an alias.”